Skip to content
You are here:Home-Uncategorized-Is the Foldable Samsung Galaxy Bloom Coming to Town?

Is the Foldable Samsung Galaxy Bloom Coming to Town?

There were rumors that Samsung was developing a clamshell foldable phone. If you do not know it yet, clamshell phones went out of style when Apple released the iPhone in 2007. Prior to that, the clamshell was the phone of the professional.

It was compact and the designs and colors were always corporate in nature. But how do you do that with a touch screen device?

Back in 2019, the phone giant teased us all with a video of a foldable phone. Back then, Samsung Galaxy Bloom was only known as the project codename, but new gossip tells us that it will be the official name of the foldable phone.

At that time, it was highly speculated that this new model will be called Galaxy Fold 2. This is not the company’s first rodeo with foldable touch screen phones. The first one, the Galaxy Fold, folds lengthwise.

But why fold it as a clamshell now?

Samsung thought that it sold about a million units of the Samsung Fold. Now, it is becoming apparent that it has sold only about half a million.

While Samsung manages to sell 78 million units of its smartphones worldwide every quarter, the phone giant does not seem to have an adequate female customer base.

Rumor has it that the clamshell is going to change all this.

Because the clamshell is similar to the powder and make-up kits that women use. In fact, the design took inspiration from a French cosmetic company called Lancôme, which is popular for its clamshell make-up kits. 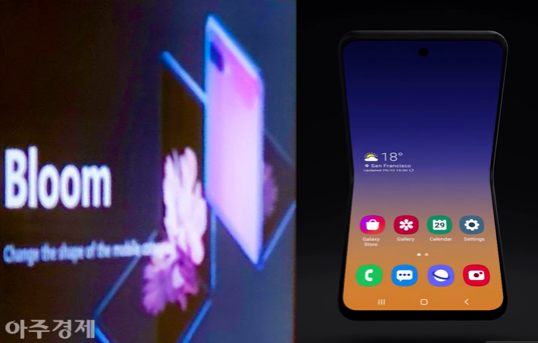 As of now, the only thing we know about the new phone is that it will not use plastic glass for its screen like it did on the Samsung Galaxy Fold. Instead, it will use a different glass called UTG or Ultra Thin Glass.

Now, the fun part. There are talks that this phone is so powerful that it can record 8K videos! YouTubers would love it, as they can now record videos with higher quality resolution.

On top of that, there are words that this phone will be released on 5G, which is just appropriate as a lot of telcos are now gearing towards this technology.

But wait, what about the cost? If the Galaxy Fold is priced at $1,980, then we can surely expect that the Galaxy Bloom will not be any lower than this.

Because of the clamshell design, we highly doubt that this will have three rear-facing cameras. One should be enough, but it is likely that it will have two front-facing cameras like its predecessor.

And because it is clamshell, there is doubt as to whether it needs the capacity to run at three apps at the same time. Maybe an app continuity for two apps is a conservative expectation.

What we do expect, however, is that it maintains the power that its predecessor had, like a 7 nanometer processor, 12GB of RAM, and an app continuity for two apps.

Samsung fans are dying to see this. The good news is that we do not have to wait that long. Samsung is going to unveil new products on February 11, 2020.

Watch out for the Unpacked Event by Samsung.

The event is said to reveal 5G phone lines, and at least three new models. The thing is, despite the company launching these products, we may not see the successor of the Galaxy Fold.

We can only cross our fingers and hope for the best as Samsung unfolds its new line of devices.